read this fact earlier today and it actually made my life 😂

it all occurred because a person passing by the house heard a screaming child and a man within the house shouting “why don’t you die?!” 😳

obviously, fearing the worst, the passer-by called the police. the police subsequently scrambled multiple officers … worrying that a murder was in progress 🙈

when they arrived, they found that it wasn’t murder … well, not human murder 😅 instead, it was a guy with a deathly fear of spiders trying to remove a huge spider from his house 🕷 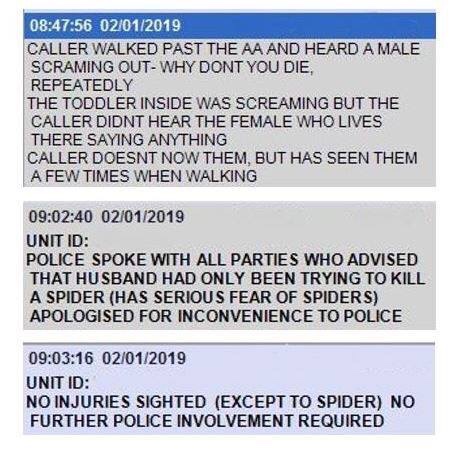 literally lol’d so much at this little bit of fun 😂 i’m very easily amused!

another fact down! fancy reading something else? just take a gander ->here<-

(images! the police report came from twitter 😏 … if i’m honest, the other two are from other posts and i don’t remember their exact links! they are, however, both from pexels 😘)