this is another one of those completely useless but highly amusing posts 😳 meh, it’s saturday 🤷🏻‍♂️

on second thought, that very possibly doesn’t make all that much sense out of context 😂 i should probably explain 😅

so, you may remember that fairly recent facebook analytica scandal? well, that’s where this came from … mark zuckerberg drinking water … literally soooo much water 😳

if you didn’t see mark in front of the us senate over the scandal, then you probably aren’t away of the massive amount of jokes that it spawned 🙈 it pretty much confirmed that zucker is 100% a robot 🤖

anyway, reddit ate the whole thing up and, one thing leading to another, reddit user ‘propertyofmatter’ created a change.org petition to change the name of water to ‘zucc juice’ 😂 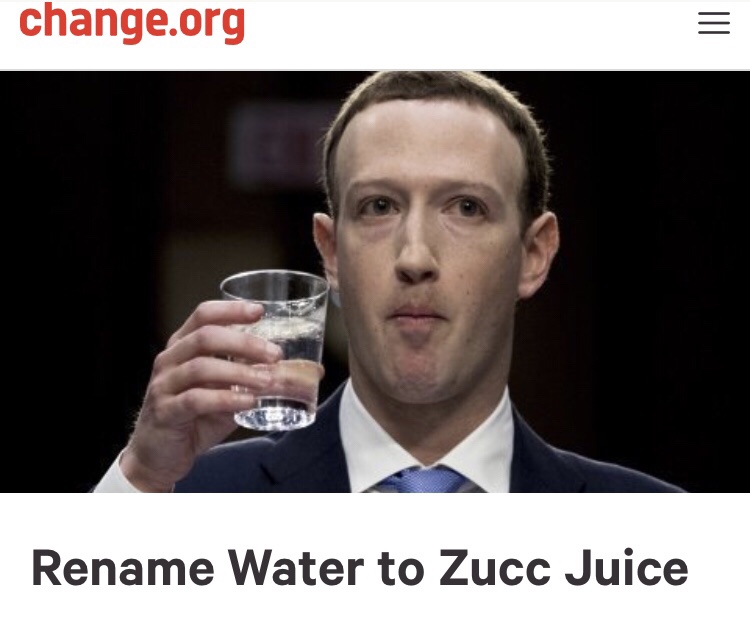 it currently has 48,000 signatures out of 50k 😏 so it’s almost totally a thing 🙌🏻 want to go have a gander for yourself? just head ->here<- … let’s face it, it’s probably the most important movement happening right now 😉

this is literally the most pointless thing on this blog 😂 want to read something actually useful? you’ll find it ->here<-